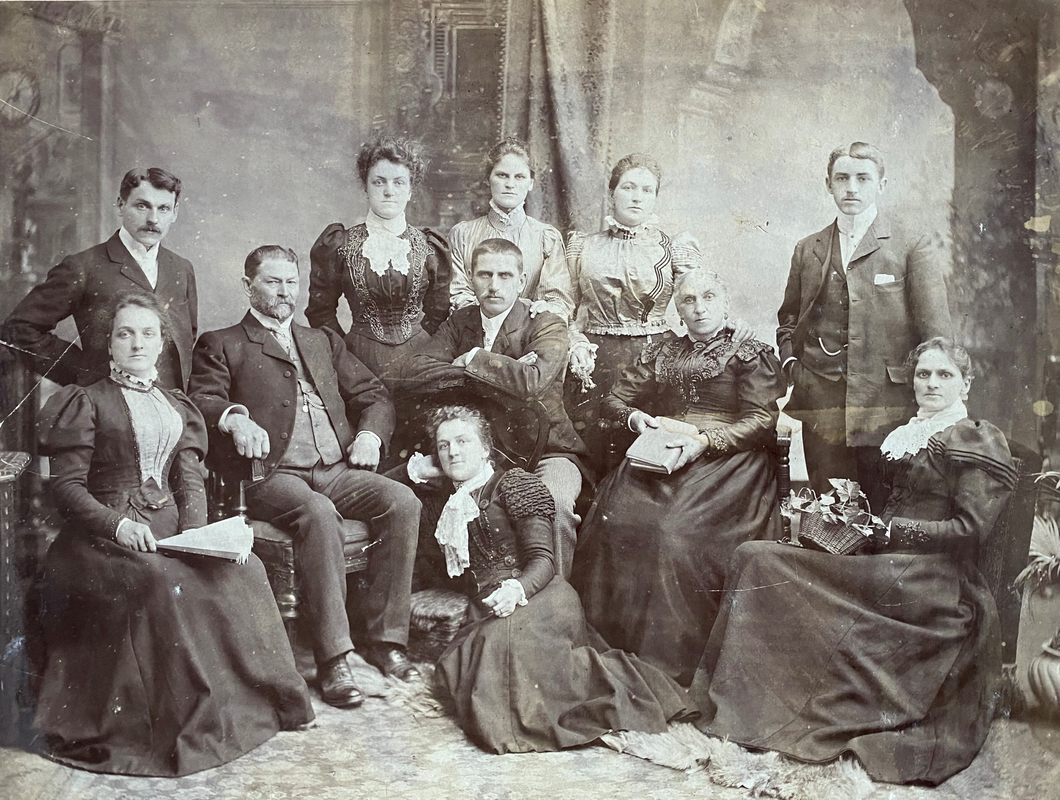 The Osborne family
Standing in the back row left to right
Thomas Osborne, Ester Osborne, Elizabeth Osborne, Nannie Penrose Osborne, John Osborne
Seated
Laura Osborne, John Charles Ellis Osborne (Father), Henry Osborne, Jane Osborne (Mother), Rebecca Osborne
Seated on floor
Wilhelmina Osborne
​John Charles Ellis Osborne (1838-1919) was my 3x great grandfather and Miles Sloman's 4x great grandfather. The Letters from Australia were written to John Charles and his wife Jane by his father Thomas Osborne Senior (1814-1884) with whom he had a trouble relationship. The letters passed down through the family from his daughter, Nannie Penrose, who married James Eddy of Trendrine, Zennor, in West Cornwall. From Nannie Penrose they passed to my grandfather Arthur Cyril Eddy and to me via his daughter Margaret.

The early letters are written in 1861 by Thomas Osborne (Snr) to his eldest son  John Charles Ellis Osborne who remained in Cornwall along with his brothers Thomas and William. The three boys were raised by their grandparents on farms in Sancreed in West Cornwall. Their father and mother, Thomas and Ann Osborne, left them and Cornwall in 1849 and set up a new life in Albury NSW where they had a further five children, four boys and a girl.

Thomas Osborne Snr is seeking a reconciliation with his son after a 15 year silence. He reports that his wife, Charles's mother, has died and the businesses (blacksmithing, boarding houses and gold prospecting) are failing as he struggles to run then on his own.  "I am a lost man in the world I enjoy no happenings nor comfort since my dear wife is gone I have no one to comfort or consol me."

His sons Thomas(1844-1927)  and William (1845-1928) set out for Australia from Plymouth on October 26th 1864. In a letter written from the Barbican they describe how the SS London is anchored there and she is going take them to a new life. "Dear Brother we felt a not a little thing to leave you although I hope we shall  see each other again in a year or two if God spares our lives. May God Guide and Direct our path while in the pathless deep"

The next letter, written on board the SS London, records the excitement of crossing the Equator and the wonder of  Table Mountain.  Generally life is very easy: "Dear Brother I can say that we get on very well we have nothing to do it’s a very lazy life   we can lye in bed as long as we like"

On 18th January 1865 William writes home from Connewarre Gulong, just outside Melborne. Their journey took just 64 days and the brothers spend the next two months meeting cousins, uncles and aunt who have established businesses in the area, dairying and fruit growing. Father is 200 miles away in Albury and the boys have no recollection of him.

On 16th April 1865 Thomas writes that he is staying with Father in Albury and meets his four brothers and sister for the first time. "Father looks more about the age of Uncle John Chapple he is not as tall as either of us. The four Brothers are not very big the youngest being about seven old but they a very whitty lads. Little sister being very short the size  of Ellen Laura, tall and thin."

By the time of their arrival Father has remarried to Elizabeth Gerard who herself has family by a previous marriage. Later one of her daughters, Matilda, becomes Thomas's wife.

The brothers support father in his businesses of blacksmithing, searching for gold (puddling) and renting accommodation but fall out over pay and rates. Thomas & myself belong together we have a little hut made of bark of trees we board ourselves. Thomas belong working into a claim on wages, the wages hear on  this diggings is from £2-10 to £3-0 per week. We have left Father, we work with Father about 3 months and He agreed to pay us wages as other men and I work that time but I did not have no wages."

Thomas strikes out on his own at Albury as the arrival of rain reinvigorates the diggings and William heads to Ballarat where he is employed by his cousin in their business Bruce & Osborne, forwarding agents. The company moves materials between   Melbourne, Gulong and Ballarat using horses and wagons.

Their letters provide us with insights into the challenges of establishing first yourself  in a new land and then the challenges and tensions faced by families. Their faith forms a strong theme throughout the letters, supporting children's education and it remained throughout  as a means of mutual support.  Ultimately the family succeeded in settling and raising hundreds of modern-day Osbornes. Yet in the eyes of those left behind in Cornwall it was only a temporary arrangement. As my Grandmother would say of foreign relatives "John is coming home" although the family had lived abroad for the best part of a century!